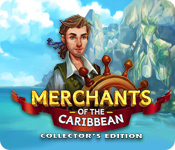 Merchants of the Caribbean Collector's Edition

Alawar Entertainment embarks on a high-seas adventure with Merchants of the Caribbean! Stake your claim in the New World in a swashbuckling adventure for every age! Defeat thieving pirates in thrilling ship-to-ship battles and employ your economic smarts as you coax a booming province out of the uncultivated lands! Are you prepared for the journey that lies ahead? Sailors, cannons and boundless courage are at your disposal, so place all hands on deck as you set out for excitement and success! This is a special Collector's Edition release full of exclusive extras you won’t find in the standard version. As a bonus, Collector's Edition purchases count toward three stamps on your Monthly Game Club Punch Card! The Collector’s Edition includes: