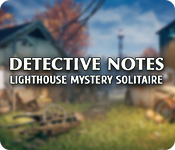 In this clever solitaire mystery game, follow Mark and his sister Lily as their lives are upended when they learn of their father’s mysterious disappearance! After hurrying home, they team up with a detective to help them start the search. However, during their investigation, they'll come to learn that their father's disappearance is only the tip of the iceberg. As they delve deeper into the mystery, someone tries to divert them, leads become tangled and too many people fall under suspicion. You’ll have to put your detective skills to the test to stay on track and find their father. But that's not all... Complete 200 solitaire layouts of varying difficulties, find clues in 20 hidden object levels, discover stories that were hidden away years ago, and solve the mysterious crime!